Among his other accomplishments, Alan Watts (1915-1973) was foremost a master of communications. During his lifetime he wrote more than twenty books on philosophy, psychology of religion, Hinduism, Buddhism, Taoism, and Zen. More than twenty posthumous collection of his work have also been published. His radio programs and recorded lectures continue to be popular to this day. Since Alan Watts lived and worked on the ferryboat Vallejo in Sausalito in the sixties, his name is usually linked with Sausalito’s sixties counterculture and artist Jean Varda.

The Sausalito Public Library has a large collection of Alan Watts lectures on CD available to check out. The CDs are located in the Audiobook section of the Library.

Within the spoken word arena, Alan Watts lectured to a specific audience. Large collegiate audiences amused Alan Watts, and in that context, he described himself as a "philosophical entertainer."  In contrast, the Alan Watts seminars were weekend events occurring at someone’s home or studio, usually with 20 or 30 students in attendance.

The Sausalito Library owns many works written by Alan Watts, published during or after his lifetime. In his books, his principal concern was the exploration and explanation of man’s basic identity with the universe, underlying and having greater reality than the apparently separate person.

Books by Alan Watts in the Sausalito Library Collection 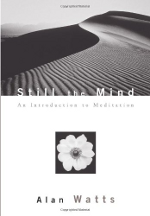