Sausalito’s first privately funded library “reading room” opened, called the Sausalito Free Library and Reading Room. Members paid dues to borrow books; the reading room was free to all. Reverend Frederick Reed, first rector of Christ Church was president. This and other reading rooms would open and close during the next 12 years.

Sausalito Public Library, “a place of healthy and innocent recreations” (Stroman, p.16), was founded with promised help from the California State Library Traveling Library Program, an appropriation of funds from the town of Sausalito, donations from citizens, and a property tax. The first trustees were Father John Valentini, Reverend George Maxwell, Florence Wooser, and Caroline Fiedler. 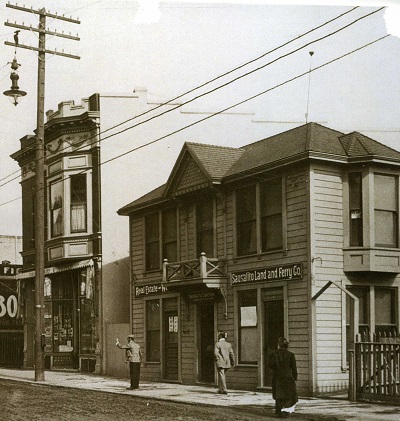 The library opened on the second floor of the Sausalito Land and Ferry Company building, next to the San Francisco Yacht Club on Water Street (renamed Bridgeway after the opening of the Golden Gate Bridge). The rent was $20.00 per month.

The first librarian was Eugenie Melville, who was paid $60.00 per month.

Library was remodeled and expanded over the entire second floor.

In December, the Library moved into the auditorium and lunch room of the old Central School at 420 Litho Street, which also became the home of the Sausalito Civic Center. The Central School, built 1927(?) on the block between Litho, Bonita, Bee and Caledonia, was the original location of the old Richardson School (built 1888), which was moved in 1926 down the hill to the corner of Caldonia and Litho Street and is now Waterstreet Hardware.

First remodel of the library which was closed in February and books were placed in storage. Some services (and 6000 books) were transferred to a trailer in the parking lot. Library reopened on September 20 after the installation of a mezzanine and elevator.

Library purchased the first computer for public use, the Commodore PET.

Mary Richardson became city librarian and served for the next 27 years.

MARINet was established by a Joint Powers Agreement on June 12, 1991, by founding members: Sausalito, Mill Valley, San Rafael, and Marin County libraries for the implementation and maintenance of an online catalog and library management system.

Second remodel of the library was completed on March 4. The library remained open during remodeling, but a “micro library” was set up in the hall, where staff retrieved items for patrons. The remodel project entailed the enclosure of the children’s room and the consolidation of reference and circulation desks into a single service desk with separate stations for reference and circulation. New display shelving was added to the lobby area to increase the visibility of new and popular materials, as well as a new e-book “petting zoo.”

The Sausalito Library History Timeline was compiled from:

Special thanks to Bonnie Groshong